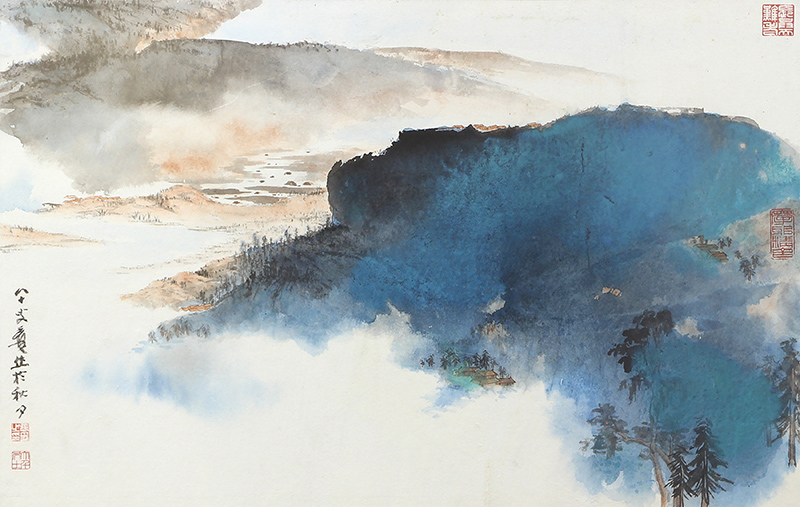 Zhang Daqian or Chang Dai-chien (1899-1983) is one of the most prominent and celebrated artists of the 20th century in the world.  As one of the more prolific artists, he left behind a legacy as a master painter.  He is known for his great breath of work, who mastered various traditional Chinese painting styles including the monumental landscapes of the Song dynasty to the Buddhist figural paintings of the Mogao caves in Dunhuang.  His capacity to produce classical paintings was to the point where prized pieces at major museum were speculated to have been produced by the hands of Zhang.

Despite his command of the classical style, Zhang Daqian is often revered for his splashed color and ink paintings that he did during the second half of his life.  Often seen as a product of his deteriorating vision during his middle ages, however, the development of this style reveals his adaptability and creativity when approaching challenges, and ultimately his ability in turning them into opportunities. Due to the political turmoil in China after 1949, he moved to the Americas and travelled extensively, holding exhibitions worldwide. One of the highly publicized events was a meeting with another high caliber artist, Pablo Picasso, in 1956.

He established a strong presence in the local art scene in California as well, where he resided from the late 1960’s for a decade in Carmel. One of the highlights of this period was a 40 years art retrospective exhibition in San Francisco in 1972. In connection with this exhibition, The Images of Chang Dai-chien a set of five lithographic prints, was published by Editions Press in San Francisco and sold in Clars Auction Gallery’s May 2010 auction for $6000.  In this set, his splashed color/ink was well represented by having two polychrome landscapes, one an ink monochrome landscape and one a lotus. And the last print which did not fit into the scheme was titled Persimmon, which represented his earlier traditional approach.  Through these multiple originals, he was able to share his artwork with a wider audience despite his ailing health.